Your agents returned my emails promptly and the web site had all the prices and no surprises, the final price was the total...no hidden costs and straight forward. ...

Our 2020 Kentucky Speedway Quaker State 400 NASCAR travel tours and race packages include roundtrip track transfers by deluxe motorcoach to Kentucky Speedway on Friday and Saturday with an experienced tour representative, informative tour booklet, all taxes and other options to enhance your race experience. The meeting location for the bus will be The Brown Hotel-Lousiville. Tickets for the race can also be purchased in in your choice of Grandstand 3, 4 or upgrade to the Kentucky Tower, the Indiana Tower, or the Quaker State Tower. 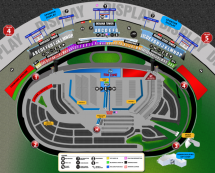 Located in Sparta, KY., and constructed on 820 acres of land, Kentucky Speedway showcases the most prominent race series on its 1.5-mile tri-oval with 14-degree banking in the turns and a 1,600-foot backstretch. The tri-oval is 70-feet wide and includes a 12-foot apron. The facility also features a paved quarter-mile track.

From premier fine dining in the English Grill to the light and airy elegance of J. Graham’s Café to the jaw-dropping glamour of the Lobby Bar, The Brown Hotel is home to Louisville’s most exceptional and memorable dining experiences. While every meal at The Brown Hotel is memorable, we’d be remiss if we didn’t suggest at least one “Hot Brown.” Indeed, it’s a culinary requisite on any visit to Louisville. “The Hot Brown” is a legendary dish invented at The Brown Hotel in 1926. It has been featured in the New York Times, the Wall Street Journal, the Los Angeles Times and dozens of other media outlets (and cookbook pages) since its baked-to-perfection debut.

If you’d prefer to drink in the history of Louisville, The Brown Hotel is the premier address on the Urban Bourbon Trail, a collection of bars and restaurants that know and appreciate bourbon. From bourbon cocktails like Ali’s Smash and Kentucky Cider to bourbon flights, The Brown Hotel is a requisite stop for bourbon enthusiasts.

The historic Louisville story is one of fairytale romance and unforgiving reality, played out against the backdrop of some of the most remarkable events of the early 20th century. The Great Depression, the Ohio River Flood of 1937, World War II – each of these milestone events helped to shape the history of our storied hotel.

Built by wealthy Louisville businessman J. Graham Brown, The Brown Hotel opened in downtown Louisville at the corner of Fourth and Broadway on October 25, 1923. That year, Louisville was the 34th largest city in the country with a population of 235,000. Fourth Street was already an established promenade and The Brown Hotel became the cornerstone of "The Magic Corner." In the decades since, our historic hotel has played a starring role in the life of Louisville.