We had an amazing time. This was the first time going to NASCAR, such a wonderful experience, very happy with the hotel, our tickets and our pit passes. I would ... 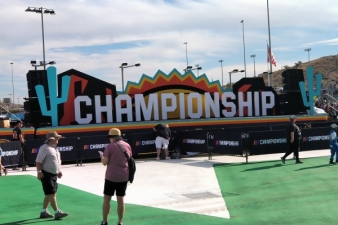 Join us in the Valley of the Sun on one of our Phoenix NASCAR Packages for Championship Weekend for the NASCAR Cup, Xfinity and Truck Series.  NASCAR’s biggest names will visit the “Desert Jewel” – Phoenix Raceway to claim one fo the NASCAR championships! Nestled in the foothills of the Estrella Mountains, Phoenix Raceway has hosted the NASCAR Cup Series since 1988, with Alan Kulwicki winning the inaugural “Checker 500.” Since then Phoenix Raceway has added modern conveniences such as escalators, elevators and individual stadium seating. Phoenix Raceway also moved the Start/Finish Line to the old back stretch and unveiled the “INfield,” an interactive garage experience getting you closer to the action. Our Phoenix NASCAR Travel Packages and Race Tours for Championship Weekend include the options of the Embassy Suites by Hilton Scottsdale Resort or the Hampton Inn and Suites Scottsdale. We have options for the Cup, Xfinity and Truck Series races with our weekend ticket packages, as all three series will be crowning their Champions. Our Phoenix NASCAR Race tour is sure to sell out early, so join us for a Wild West Shootout on one of our Phoenix NASCAR Travel Packages for Championship Weekend!